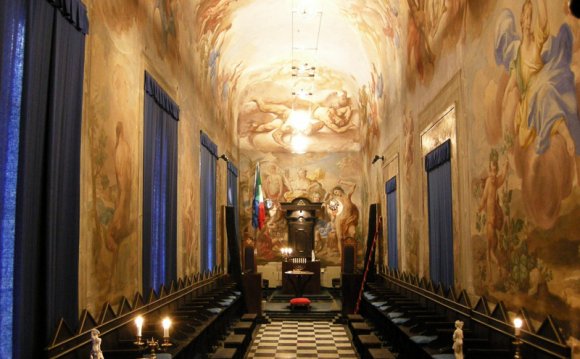 A member of the brotherhood known as Freemasonry. Commonly called Masons, these people have social events for the community, charity events, and focus on belief in God and brotherhood. They are often falsely accused of being satanists, occultists, pagans and out for world domination. Often times, ignorant people will refer to them as "pagan devil worshippers" which anyone with any knowledge on the subject would know, are two different things, neither of which describe freemasonry. The biggest problem freemasons face is that people with no clue what they are talking about accuse them of such outlandish charges. It should be noted that a definition on this page says that freemasons wrote the Bile. If the author of this definition had any knowledge of history, he would realize that the Bible was written centuries before freemasonry, which originated from guilds of stone workers in Europe, even existed.

A guild consisting of a bunch of old guys sitting around drinking beer and wearing funny hats.

"A Rite Of Passage", is a song by Dream Theater which talks about Freemasons.

A member of a Masonic Lodge. Freemasons generally focus on brotherly union, charity, and the community. First, to become a Mason you must meet a few requirements. The requirements are as follows:

1.Be a man who comes of his own will.
2.Believe in some Supreme Being, God, or Deity. This does not mean it has to be God. It is open for the interpretation and no one shall be placed in a situation of having to explain their interpretation.
3.Be of minimum age (depends on jurisdiction)
4.Be of good morals and reputation.
5.Be of sound mind and body.
6.Be free-born. You cannot be born a slave.
7.Be able to produce character references and possibly one or two references from current Masons.

A misconception is of them being "devil worshipers, pagans, NWO supporters" etc. There are a few clarifications I'd like to make to those judgments. Any form of devil worship is recognized in most forms except LaVeyan Satanism which can be disputed. Pagans I do not know if they'd be accepted considering they worship many gods, not one. And NWO is a political concept and thus excluded from any situation in the Masonic Lodges.

Masons have many levels and different organizations but the structure is mostly the same except a few specifications like rituals, passcodes, etc.

Most conspiracy theories about this organization comes from the secrecy they hold to their doings. They keep their privacy for their own reasons. It is just demonizing an organization trying to be peaceful and helpful.

Freemasons are people who work to help their communities, support charities, and assist their brothers.

Good people, from my experience with them. Unfortunately they are an object of conspiracy for the paranoid masses.

Masons (also known as Freemasons) belong to the oldest and largest fraternal organization in the world. Today, there are more than two million Freemasons in North America. Masons represent virtually every occupation and profession, yet within the Fraternity, all meet as equals. Masons come from diverse political ideologies, yet meet as friends. Masons come from varied religious beliefs and creeds, yet all believe in one God.

Many of North America's early patriots were Freemasons. Thirteen signers of the Constitution and fourteen Presidents of the United States, including George Washington, were Masons. In Canada, the Father of the Confederation, Sir John A. MacDonald, was a Mason, as were other early Canadian and American leaders.

Masons are everywhere, all our history is full of them