History of Masons in America 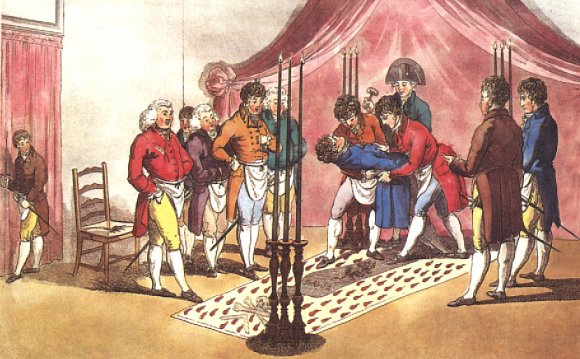 Mitch Horowitz is the editor-in-chief of Tarcher/Penguin and the author of Occult America: The Secret History of How Mysticism Shaped Our Nation (Bantam).

As millions of readers—not to mention anxious booksellers and publishers—await the launch of Dan Brown's latest novel on September 15th, public interest is riding high on the book's presumed theme: the hidden hand of Freemasonry behind American history. Americans love a good mystery and Freemasonry—with its penchant for occult symbols and once-secretive membership rolls that included presidents from George Washington to Franklin Roosevelt—has long provided one.

But Freemasonry's real impact on America is richer and more significant than anything that entertainment or speculation would hold. As a radical thought movement that emerged from the Reformation, Freemasonry was the first widespread and well-connected organization to espouse religious toleration and liberty—principles that the fraternity helped spread through the American colonies.

It may seem anomalous for such liberal principles to arise from a clandestine brotherhood; but skullduggery was never Masonry's primary aim. In an age of religious conflict in 17th century Europe—when an individual caught running afoul of church strictures could suffer persecution or worse—Freemasons clung to secrecy less out of esoteric drama than political expedience. Freemasons believed in a search for religious truth as it existed in all civilizations, including those of a pre-Christian past, and they drew upon ancient and occult symbols, from pentagrams to luminescent eyeballs, as codes for ethical development and civic progress. Reactions from church authorities ranged from suspicion to hostility. European Masons had good reason to be discrete.

In a young America, Masonic ideals fully took flight—sometimes in unexpected ways. In Boston in 1775, Freemasonic officials who were part of a British garrison granted local freemen of color the right to affiliate as Masons under the banner of African Lodge No. 1. The African Lodge later became known as Prince Hall Masonry, so named for the order's founder, Prince Hall, a freed slave. Hall became the first African-American named a Grand Master. Despite the African Lodge's segregated status, Prince Hall Masonry was a bastion of abolitionism. Its leader affixed his name to some of the republic's earliest anti-slavery petitions in 1777 and 1778. As such, African Lodge No. 1 represented the first black-led abolitionist movement in American history.

Whatever its airs of mystery and images of skulls, pyramids, and all-seeing eyes, Freemasonry's most radical, even dangerous, idea was the encouragement of different faiths within a single nation. Early in his first term, Washington communicated these ideals in a letter to the congregation of a Rhode Island synagogue: "It is now no more that toleration is spoken of as if it was the indulgence of one class of people that another enjoyed the exercise of their inherent natural rights. For happily, the government of the United States, which gives to bigotry no sanction, to persecution no assistance, requires only that they who live under its protection should demean themselves as good citizens..." In other words, in this new nation minority religions were not just guests at the table, but full householders.

Washington and other early American Freemasons rejected a European past in which one overarching authority regulated the exchange of ideas. And this outlook is found in one of the greatest symbols associated with Freemasonry: The eye-and-pyramid of the Great Seal of the United States, familiar today from the back of the dollar bill. The Great Seal's design began on July 4th, 1776, on an order from the Continental Congress and under the direction of Benjamin Franklin (another Freemason), Thomas Jefferson, and John Adams. The Latin maxim that surrounds the unfinished pyramid—Annuit Coeptis Novus Ordo Seclorum—can be roughly, if poetically, translated as: "God Smiles on Our New Order of the Ages." It is Masonic philosophy to the core: The pyramid, or worldly achievement, is incomplete without the blessing of Providence. And this polity of man and God, as Masonry saw it, required a break with the religious order of the Old World and a renewed search for universal truth. In its symbols and ideas, Masonry conveyed a sense that something new was being born in America: that the individual's conscience was beyond denominational affiliation or government command.

History of Policing in America (clip)

200+ Years of American History in 3 Minutes