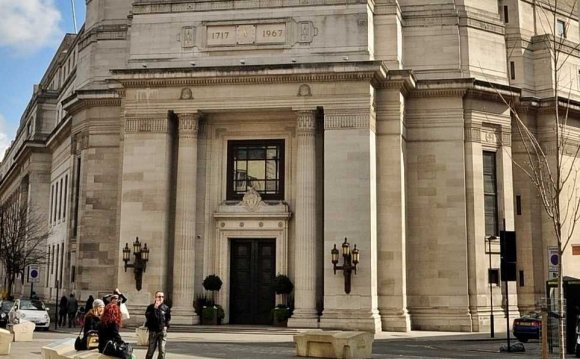 If you stumbled upon the old King David Lodge in northeast Oklahoma City, you probably wouldn’t be impressed. From the outside, there’s little to indicate that this squat building once was home to the largest group of black Freemasons in the state.

The Masons still meet there, although their numbers are fewer. Their members are growing older, with more gray hair than black, and the lodge is showing signs of age, too. Discolored ceiling tiles, some warped by past water leaks, bulge like blisters about to burst. The carpet no longer looks new, and the exterior doors recently were fitted with better locks to keep safe the treasures within.

There are many treasures, but not cash or things a thief could pawn. The lodge’s most valuable commodity is its past, a rich history that some fear will be lost as the great battles for civil rights fade into memory and membership falls.

The story of black freemasonry parallels the path to equality, a path that began before the United States was born. It tracks from New England to the territories. In Oklahoma, black fraternal organizations — not just the Masons but also the Knights of Pythias, Elks and Oddfellows — helped build leaders and communities by providing for families, supporting social programs and establishing close partnerships.

“Back in the day — the ‘30s, ‘40s, ‘50s, ‘60s — everybody was a Mason, ” said Kevin Cox, former state representative and a Past Worshipful Master in the Oklahoma City lodge. “Everybody. If you were respected, whoever you were — a skycap, Pullman porter … doctor or entrepreneur — it didn’t make any difference. You were a Mason.”

Masonic history is muddied by limited documentation and speculative accounts. Some say the Freemasons began in Egypt hundreds of years before Christ. For our purposes, though, we can skip ahead to 1733, when the first Masonic lodge in North America popped up in Boston.

That’s where black freemasonry was born.

Prince Hall was a black abolitionist and leather worker. Various accounts indicate he was born in Africa or Barbados. He likely was a slave who was given his freedom in 1770.

Clearly, he was a canny observer and an intelligent man. Noticing that British soldiers in Boston had established “satellite chapters” of their home lodges, he applied for membership, according to Encyclopedia.com.

“He may have concluded that joining the Masons represented a path toward integration into the mainstream of American society, ” the website notes. “He may also have been motivated by the summary rejection of antislavery petitions by the colony’s government in 1773 and 1774.”

Shortly before the start of the Revolutionary War, the British soldiers accepted Hall and 13 other blacks into their Masonic ranks. Within four months, the men formed African Lodge No. 1. Hall was its first Grand Master.

The lodge’s power was limited. Members could meet up and march in parades and funeral processions, but they had no charter. They couldn’t welcome new members or bestow degrees without it. After several years, Hall appealed to Britain for a charter, which was granted. The lodge, now accepted into the broader scope of freemasonry, became African Lodge No. 459.

Obtaining the charter is “the most intriguing” part of Hall’s story, said Currie Ballard, an Oklahoma black historian.

“When the founding fathers realized what had happened, they said, ‘Well, we have broken with the crown. We no longer recognize its authority.’ These are rules that had been in place for hundreds of years. But when Prince Hall got involved, the rules changed. The rules always change when black people end up with an advantage, but we still love and support this country.”

By the 1890s, Prince Hall freemasonry reached the Oklahoma Territory.

“Oklahoma was a unique situation, ” Ballard said. “The blacks once owned by the Native Americans obtained property as a result of that enslavement. Blacks could not send children to obtain rudimentary education. They weren’t allowed to do business in white establishments.

“The people of the deep South saw Oklahoma as the promised land. Masonry thrived. By the teens and ‘20s, there were hundreds of lodges in this state. I mean hundreds. They were an integral part of the black community.”

The benefits of membership went beyond socializing.

“Services such as burial insurance, donations to the needy, support for the … YWCA and the … YMCA emanated from the organization, ” notes the online Encyclopedia of Oklahoma History and Culture. “They were also self-help groups that emphasized thrift, industry, and morality. Additionally, fraternal orders provided a training ground for leadership.

“Within a society that emphasized the degradation of blacks, these organizations provided an environment where they could actively use their talents and abilities. … The lodges offered recreation, companionship, recognition and talent development, which made life in a segregated world more bearable.”

Boley, at one time Oklahoma’s largest all-black town, erected a Grand Lodge in 1912. The lodge served as headquarters for the state’s Prince Hall Masons.

“It was the tallest building between Oklahoma City and Tulsa, ” Cox said. “And then it burned down” in the 1950s.

Around 1954 — the same year Thurgood Marshall, a Prince Hall Mason, successfully argued to the U.S. Supreme Court the Brown v. Board of Education case that ended school segregation — Oklahoma City’s black Freemasons began meeting at Fairview Baptist Church, Cox said. Eventually, King David Lodge No. 50 moved to its current location at 2730 NE 25, in an area of town with a large black population.

For awhile, King David Lodge had the most members of any black lodge in the state, Cox said. It was all about social service: helping widows and orphans, supporting junior athletic programs, feeding the community, donating to the YWCA and YMCA and more. Having a large membership equaled more volunteers, deeper pockets and a wider presence.

But integration marked a bit of a shift.

Once freed from segregation, many families left their old neighborhoods. A different world lay before them, filled with new restaurants and stores, entertainment and distractions. Community ties weakened gradually, and as the civil rights era moved into the past, interest in social service waned, Cox said.

Looking to the future

Now the northeast Oklahoma City lodge — like those of other fraternal organizations, black and white — is working to add youth to its stock of wisdom.