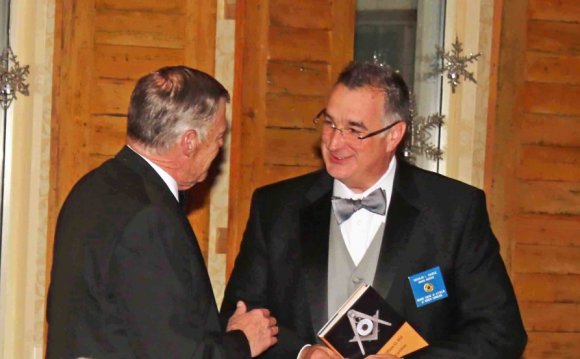 The word lodge really has two meanings to a Freemason. It is both a place where Masonic meetings are held, and a collective term for the members who meet there. So, as weird as it sounds, you could say that a lodge meets in a lodge. In fact, many different lodges can meet at different times in the same lodge building. This practice is common in larger cities, where one building may have many rooms for lodge meetings and dozens of lodges that share them.

Masonic lodges are named by their original founding members. They can be named after the town they're in, a historical figure, a famous Mason, or even a symbolic word or phrase. The name of the lodge is always followed by a number, such as Washington Lodge #13 or Ancient Landmarks Lodge #319. The number is issued by the governing Grand Lodge and designates the order in which lodges have been chartered in that jurisdiction. The older the lodge, the smaller the number.

Many of the details in a lodge room are patterned after aspects of King Solomon's Temple, as described in the Bible and other historical records. Freemasonry teaches by symbolism, and much of that symbolism is based upon the accounts of Solomon's Temple. The Temple was built in the 10th century B.C. on Mount Moriah in Jerusalem. Solomon built it as a temple to God and to store the sacred Ark of the Covenant, which contained the tablets of the Ten Commandments given by God to Moses. The details of Solomon's Temple are described in the Bible in 1 Kings and 2 Chronicles. In its time, the temple's magnificence was known all over the ancient world.

Early stonemasons claimed their guilds originated with the great construction projects of the Bible, to give themselves a long, proud, and sacred pedigree. When Freemasonry became a philosophical organization in the 1700s, the Masons who developed the ceremonies and practices of the fraternity seized on the symbolism of Solomon's Temple to help teach moral and spiritual ideas.

A lodge room contains much that is based on interpretations of descriptions of Solomon's Temple. There are many variations throughout the world, depending on differences in customs, rituals, and rules, but in general, lodge rooms are arranged in a very similar fashion.

The Vatican, the P2 Masonic Lodge, and the Mafia pt.1/5