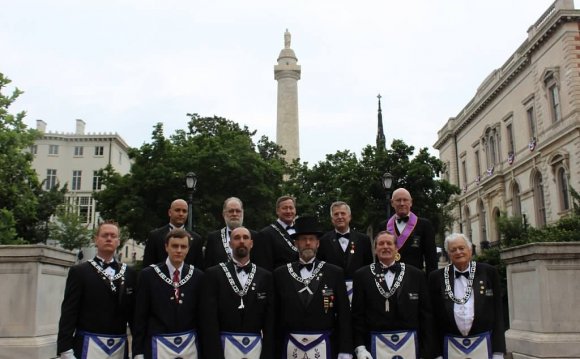 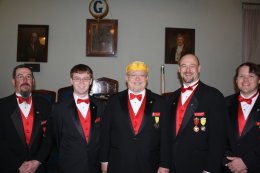 One of the great joys of my Masonic life has been my membership in the Scottish Rite, Northern Masonic Jurisdiction, and more particularly my involvement in the Valley of Danville, where I had the honor of serving as Most Wise Master of the George E. Burow Chapter of Rose Croix. My officers and I are as diverse a bunch of guys as you’ll find, but we’re truly Brothers, and I would rather hang out with them and their families than do nearly anything else in the world. Christopher Both, Bill Sollers, Jeremy Bennett and Joe Dunbar are among my closest friends in Masonry.

Joe, who is currently Junior Warden, is as hard working and generous a man as I know. He cooks, works degrees, and volunteers to help, well, everybody. He works hard at memorizing ritual, and his hard work always pays off. Joe is just one of those guys you can always count on for anything. He’s a Freemason to his marrow, and is in it for the long haul. That said, and he would be the first to admit this, speaking in public is not one of his natural gifts. But Masonry has had its effect on him there, too.

At our most recent reunion, my officers and I spoke to the class, and Joe was magnificently eloquent. In a minute or so, he said, essentially, that you get out of Masonry what you put into it, that being in Masonry had given him gifts that he’d never thought possible, like speaking in public. “I could never speak in public before, ” he said. “If before you’d asked me to do this, just to speak to you here, I’d have been hiding in a corner. Now I can do it. This is just one of the things Masonry has given me, that the Scottish Rite in particular has given me. It really has made me a better man, and it’s there for you too. All you have to do is participate. Just say yes.”